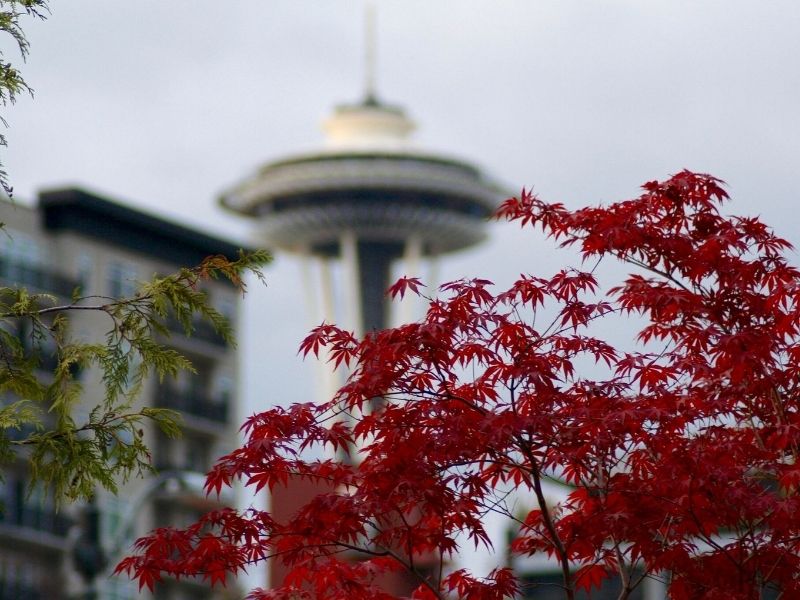 We absolutely adore Seattle, and we hope you do too!

Whether you’re looking for some inspiring quotes about Seattle, funny Seattle quotes that’ll make you smile, or some cool Seattle captions for Instagram (including Seattle puns!), we’ve curated all the best quotes and captions here.

“The bluest skies you’ve ever seen in Seattle.” – Perry Como

“We all came to Seattle in hopes of building better lives. No one said we wouldn’t have to struggle first.” – Regina Scott

“Seattle is like a global gumbo, a melting pot with all kinds of people the rich, the poor, white people, some Chinese, Filipino, Jewish and black people they’re all here.” – Quincy Jones

“In Seattle, we live among the trees and the waterways.” – Garth Stein

“All those ninnies have it wrong. The best thing about Seattle is the weather. The world over, people have ocean views. But across our ocean is Bainbridge Island, an evergreen curb, and over it the exploding, craggy, snow-scraped Olympics. I guess what I’m saying: I miss it, the mountains and the water.” –  Maria Semple

“To some extent, Seattle remains a frontier metropolis, a place where people can experiment with their lives, and change and grow and make things happen.” – Tom Robbins

“Seattle is for people who love culture, but refuse to sacrifice their wild nature to attain it.” -Kimberly Kinrade

“At night, what you see is a city, because all you see is lights. By day, it doesn’t look like a city at all. The trees out-number the houses. And that’s completely typical of Seattle. You can’t quite tell: is it a city, is it a suburb, is the forest growing back?” – Jonathan Raban

“All I really had was a suitcase and my drums. So I took them up to Seattle and hoped it would work.” – Dave Grohl

“Seattle was built out on pilings over the sea, and at high tide the whole city seemed to come afloat like a ship lifting free from a mud berth and swaying in its chains.” – Jonathan Raban

“My wife and I just prefer Seattle. It’s a beautiful city. Great setting. You open your front door in the morning and the air smells like pine and the sea, as opposed to bus exhaust.” – Ron Reagan

“I have a fond place in my heart for Seattle.” – Magic Johnson

“Here in the corner attic of America, two hours’ drive from a rain forest, a desert, a foreign country, an empty island, a hidden fjord, a raging river, a glacier, and a volcano is a place where the inhabitants sense they can do no better, nor do they want to.” ― Timothy Egan

“It’s hard not to fall in love with Seattle on a beautiful summer’s day.” – Robert Spector

“The sky in Seattle is so low, it felt like God had lowered a silk parachute over us. Every feeling I ever knew was up in that sky. Twinkling joyous sunlight; airy, giggle cloud wisps; blinding columns of sun… Gigantic puffy clouds, welcoming, forgiving, repeating infinitely across the horizon as if between mirrors; and slices of rain, pounding wet misery in the distance now, but soon on us, and in another part of the sky, a black stain, rainless.” -Maria Semple

“He was actually quite fond of Seattle’s weather, and not merely because of its ambivalence. He liked its subtle, muted qualities and the landscape that those qualities encouraged if not engendered: vistas that seemed to have been sketched with a sumi brush dipped in quicksilver and green tea. It was fresh, it was clean, it was gently primal, and mystically suggestive.” ― Tom Robbins

“We need a new ethic of place, one that has room for salmon and skyscrapers, suburbs and wilderness, Mount Rainier and the Space Needle, one grounded in history.”― Matthew Klingle

“I love Seattle. I couldn’t be anywhere else.” – Lauren Jackson

“I miss Seattle a lot. It was my first city that I lived in on my own. It was a great city to play for… in the back of my mind, I still have a thing for Seattle and always am going to remember what they’ve done for me.” – Kevin Durant

“On the mainland, a rain was falling. The famous Seattle rain. The thin, gray rain that toadstools love. The persistent rain that knows every hidden entrance into collar and shopping bag. The quiet rain that can rust a tin roof without the tin roof making a sound in protest. The shamanic rain that feeds the imagination. The rain that seems actually a secret language, whispering, like the ecstasy of primitives, of the essence of things.” – Tom Robbins

“In Seattle we live among the trees and the waterways, and we feel we are rocked gently in the cradle of life. Our winters are not cold and our summers are not hot and we congratulate ourselves for choosing such a spectacular place to rest our heads.” – Garth Stein

“Seattle is beautiful. You look at the sky and it’s one of the most beautiful skies in the world, and then there’s the Puget Sound, which will kill you, if you fall into it, but it’s also beautiful. Seattle is a city of contradictions…. Within the same city, there’s darkness and light.” – Veena Sud

“…Seattle has unleashed this weird phenomenon on the world called the coffee shop. And the coffee shop, thanks to Starbucks, is the place where socially isolated, lonely, needy people gather together to ignore one another.” – Mark Driscoll

“She was back in western Washington state, where rain was so prevalent that a day of sunshine was the lead story on the local news.” – Susan Mallery

“Seattle, the mild green queen: wet and willing, cedar-scented, and crowned with slough grass, her toadstool scepter tilted toward Asia, her face turned ever upward in the rain; the sovereign who washes her hands more persistently than the most fastidious proctologist.” –  Tom Robbins

“In Seattle you haven’t had enough coffee until you can thread a sewing machine while it’s running.” – Jeff Bezos

“Seattle is not an overly friendly city. It is a civil city, but not altogether friendly. People from outside mistake the civility for friendliness. Seattle is full of people who have their own lives to live. They won’t waste their time being friendly. But they are civil.” – Jonathan Raban

“Those East Coast rich kids are a different breed, on a fast track to nowhere. Your friends in Seattle are downright Canadian in their niceness. None of you has a cell phone. The girls wear hoodies and big cotton underpants and walk around with tangled hair and smiling, adorned backpacks. Do you know how absolutely exotic it is that you haven’t been corrupted by fashion and pop culture?” – Maria Semple

“I was a punk in those days. It was in Seattle. I still have all my teeth too, it’s amazing.” – Meredith Brooks

“When I grew up in Seattle, by the way, in the 70’s, it was a fishing village. There were loggers and fishers and my dad had a sewer company and it wasn’t the way Seattle is now. Culturally, it was very different back then.” – Rainn Wilson

“In Seattle, they have a saying: ‘If you don’t like the weather, wait five minutes and then shoot yourself in the face.'” – Doug Benson

“Its like a hypnotist put everyone from Seattle into a collective trance. You are getting sleepy, when you wake up you will want to live only in a Craftsman house, the year won’t matter to you, all that will matter is that the walls will be thick, the windows tiny, the rooms dark, the ceilings low, and it will be poorly situated on the lot.” – Maria Semple

“Hovering over me was the Chihuly chandelier. Chihulys are the pigeons of Seattle. They’re everywhere and even if they don’t get in your way, you can’t help but build up a kind of antipathy toward them.” – Maria Semple

“Unfortunately Seattle is my muse, for the better or worse of Seattle – I’m not sure.” – Maria Semple

“In Seattle, I soon found that my radical ideas and aesthetic explorations – ideas and explorations that in Richmond, Virginia, might have gotten me stoned to death with hush puppies – were not only accepted but occasionally applauded.” – Tom Robbins

“I really enjoy doing theater, but doing theater in Seattle is like dropping a brick in a bottomless well. It’s gratifying, but it’s almost like doing radio. It’s ephemeral.” – Dan Savage

“Just the other day, I was in my neighborhood Starbucks, waiting for the post office to open. I was enjoying a chocolatey cafe mocha when it occurred to me that to drink a mocha is to gulp down the entire history of the New World. From the Spanish exportation of Aztec cacao, and the Dutch invention of the chemical process for making cocoa, on down to the capitalist empire of Hershey, PA, and the lifestyle marketing of Seattle’s Starbucks, the modern mocha is a bittersweet concoction of imperialism, genocide, invention, and consumerism served with whipped cream on top.” – Sarah Vowell

“And it’d be very hard to make up something as strange as the Dutch tulipmania in the seventeenth century, for example. Or the mysterious case of Thomas Clapper. Or the entire civic history of Seattle, Washington.” – Stephen Briggs

“The bluest skies you’ve ever seen in Seattle
And the hills the greenest green in Seattle
Like a beautiful child growing up free and wild
Full of hopes and full of fears
Full of laughter full of tears
Full of dreams to last the years in Seattle
In Seattle” – Perry Como, “Seattle”

“Hello Seattle, I am a manta-ray
Deep beneath the blue waves
I’ll crawl the sandy bottom of Puget Sound
And construct my summer home” – Owl City, “Hello Seattle”

“When it’s sunny in Seattle and it’s snowing down in New Orleans
And them boys from Amarillo stop wearin’ those boots and jeans
When there’s no tequila in Mexico
That’s when I’m gonna let you go” – Blake Shelton, “Sunny in Seattle”

Seattle is my happy place.

Seattle isn’t just a place, it’s a way of life.

Now I see why they call it the Emerald City.

Spacing out in Seattle.

In Seattle, any time is coffee time.

See you in Seattle.

A little rain never hurt nobody.

You can find my heart where I left it: in Seattle.

Catch me in Seattle.

Seattle is always a good idea.

You bring the sunshine to Seattle.

I don’t care if the glass is half full or half empty. I just want to know: is there coffee in it?

I refuse to Seattle for anything less than perfect.

Seattle’s coffee scene is a thing of brew-ty.

Seattle is one Amazon city.

Seattle is more than it ap-piers.

You always said Seattle was beautiful, now I Bellevue.