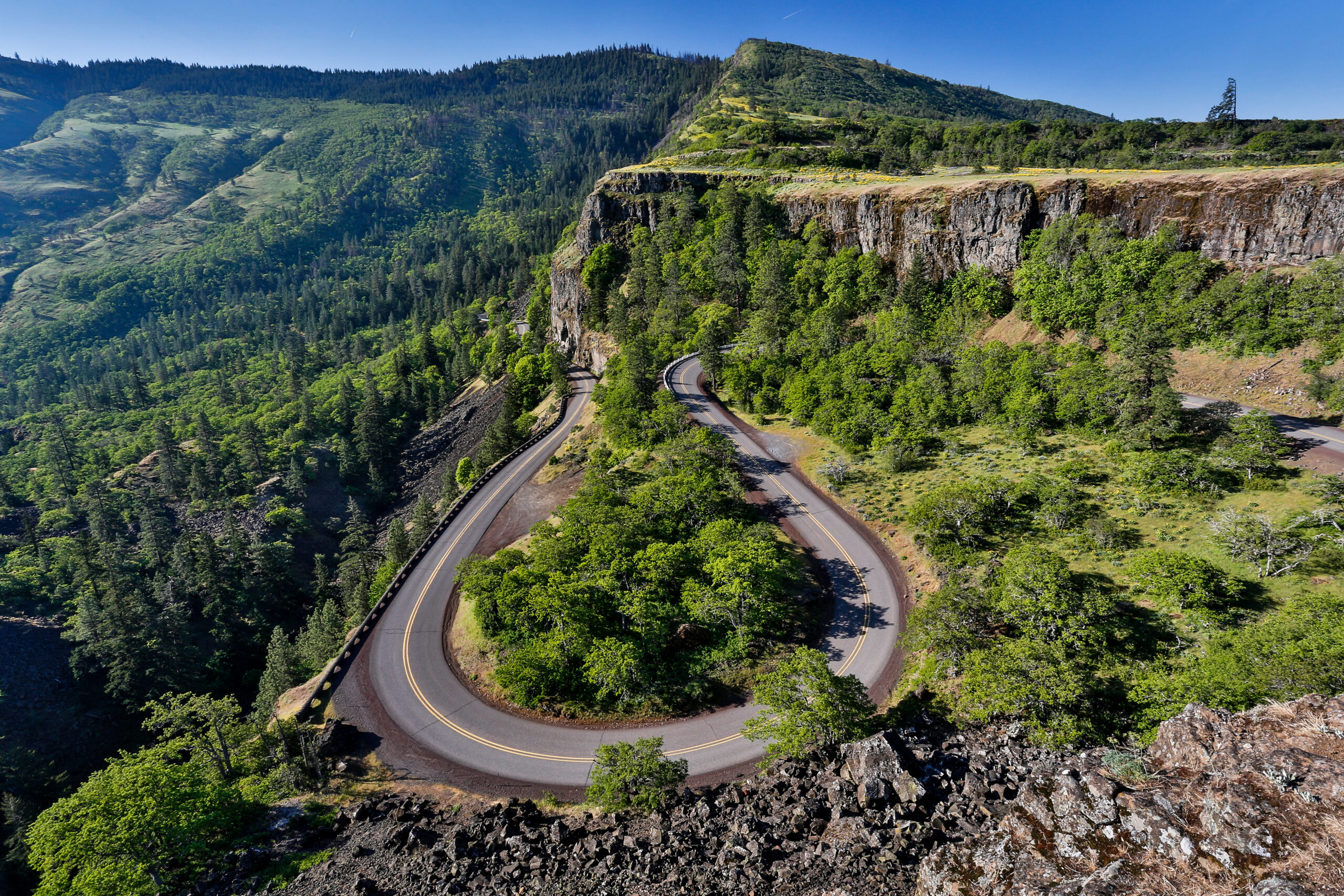 Oregon is packed with scenic beauty, from rough and rugged ocean shores to its scenic high desert formations.

In fact, the state contains the nation’s highest number of scenic byways and designated tour routes, including two that are also categorized as All American Roads!

Oregonians and visitors alike adore road tripping along these popular scenic drives in Oregon, through both well-trafficked and remote regions.

These Oregon scenic drives are usually more about the journey than the destination, and traveling on these favorite scenic routes will showcase some of Oregon’s best natural wonders!

The original scenic road of the Pacific Northwest, the Historic Columbia River Highway was created in 1913.

The purpose was to enhance the dramatic vistas of the Columbia River Gorge — as well provide access to the continent’s highest concentration of waterfalls!

Originally, the road stretched 75 miles from the outskirts of Portland to The Dalles; today, a 22-mile section can be driven starting in Troutdale and extending past Ainsworth State Park.

Along this corridor, you’ll encounter two stunning overlooks at Women’s Forum State Viewpoint and the iconic Vista House rest station, as well as a half dozen roadside waterfalls.

The tallest by far is Multnomah Falls, a full 620 feet tall plunging drop and one of the most popular waterfalls in Oregon.

Explore all 363 miles of Oregon’s coastline on US 101, designated here as the Pacific Coast Scenic Byway. It’s great for an Oregon coast road trip!

Heading southbound, the journey begins in the mini-San Francisco-esque town of Astoria, located at the mouth of the mighty Columbia River.

See where Lewis and Clark wintered at Fort Clatsop in 1905 as you travel past rugged offshore sea stacks and beloved fishing haven bays.

Seal and sea lions inhabit the central and southern Oregon coastal areas which are also home to the largest dune system on the west coast.

At Brookings, one of the southernmost coastal towns in Oregon, the highway enters California and its foggy enclave of coastal redwood trees.

Head to the far northeastern corner of Oregon on the Hells Canyon Scenic Byway, a 200-mile loop around the alpine wonderland of the 10,000 foot tall Wallowa Mountains.

The loop can be done in either direction, with entry points located off Interstate 84 at the former mining boomtown of Baker City or at La Grande, which once served as an Oregon Trail way station and regional shipping center.

While the route traverses the rich farmlands of the Grande Ronde Valley and skirts the pristine Eagle Cap Wilderness Area, the highlight of this journey is its eastern section and the dizzying overlook of 8,000-foot deep Hells Canyon, North America’s deepest river gorge.

Forming a circle around majestic 14,245 feet tall Mt Hood, the Mt Hood Scenic Byway can be started at either Troutdale (an eastern suburb of Portland) or Hood River, a mecca for windsurfers on the Columbia River.

Known as Wy’est by the Multnomah tribe, Mt Hood was named by the Vancouver Expedition of 1792 for a British Admiral who never saw the peak.

Mt Hood retains its glacer-clad white top year-round and is a favorite of both climbers and skiers.

The approach from Troutdale winds through tall forests of Douglas Fir, Western Red Cedar, hemlock, and spruce trees to crest at the town of Government Camp.

A steep side road climbs to Timberline Lodge, an iconic landmark at 6,000 feet.

As you circle around the dry side of the mountain, forests turn to ponderosa pine and the route begins to follow the east fork of the Hood River.

Nestled behind the mountain’s rain shadow is the Hood River Valley, beloved for pear, cherry, and apple orchards. The many fruit stands and vineyards give it the moniker of the ‘Fruit Loop’.

This 30-mile loop circles southwest to the town of Dorena on the Row River, circling the Dorena Reservoir.

Two of the bridges can be driven through and the Chambers Bridge is regarded as the only covered railroad bridge west of the Mississippi River.

Cottage Grove itself is worth a visit, sporting over twenty outdoor murals and functioning as a gateway to several beloved waterfalls within the lushed wooded Coast Range.

Perhaps one of the most offbeat of Oregon’s scenic drives, the Oregon Outback Scenic Byway is stunning.

It travels through high desert country from La Pine — a few miles south of Newberry National Volcanic Monument — to the California border, just past Lakeview.

The journey begins in ponderosa and lodgepole pine which quickly changes to a scrubby, sagebrush landscape that characterizes the Great Basin Region.

A short detour off the byway affords the discovery of Fort Rock, a 325 high volcanic crater.

After cresting the 4,380-foot Picture Rock Pass, you’ll pass a series of long, shallow alkaline lakes that serve as excellent habitat for brine shrimp and also a resting stop on the Pacific Flyway for an estimated 250 species of birds.

Thirteen miles before the state boundary, the town of Lakeview sits at 4,800 feet elevation, giving it the title of Oregon’s ‘tallest town’.

The North Umpqua meets the Little River head-on near the community of Glide, a phenomenon named Colliding Waters.

Another name for this byway is the “Highway of Waterfalls” and you’ll pass more than a half dozen before reaching Mt Thielsen and Diamond Lake at its base.

Here, the byway takes a sharp turn south to join with the Rogue River, whose waters aredesignated as ‘Wild and Scenic’.

The route ends at Gold Hill, home to the mysterious ‘Oregon Vortex’.

Beginning and ending in the Western-themed hamlet of Sisters — named for the nearby Three Sisters peaks in Cascade range — this Oregon scenic byway is a can’t-miss.

It makes an 80-mile circuit that includes two mountain passes and showcases west/east scenery contrasts created by the Cascades.

This section of the Cascades contains the highest concentration of snow and glacier topped volcanoes in the lower 48 states which juxtapose with stark, black lava fields.

The western mountain slopes are rich with Douglas Fir and red cedar while the eastern side sports lodgepole and ponderosa pines.

Oregon’s ‘Adventure Coast’ centers around the greater Coos Bay area and the idyllic town of Bandon is often one of the warmest sections on the state’s coastline.

The route properly starts in North Bend as the Cape Arago Highway to Charleston, a working fishing port.

The road continues to the Oregon Institute of Marine Biology (an extension of University of Oregon) and a dramatic viewpoint at Coos Head.

Cape Arago is home to a trio of stunning state parks — the warm waters of Sunset Bay, the exotic gardens of Shore Acres, and Cape Arago State Park which features tidepools and offshore seal and sea lion colonies.

Surrounding Bandon are plentiful cranberry bogs, and the route ends at the picturesque Coquille River Lighthouse.

The Journey Through Time Scenic Byway also has one endpoint in Baker City and stretches in a westward arc to Biggs Junction, alongside the Columbia River.

This route showcases the unique landscape of north-central and eastern Oregon as it passes by ghost towns and rolling farmlands alongside the Wild and Scenic John Day River.

The Byway’s top feature is the three units of John Day Fossil Beds National Monument, Oregon’s colorful and dramatic badlands, and the adjacent town of Fossil affords a chance to dig for your own keepsakes.