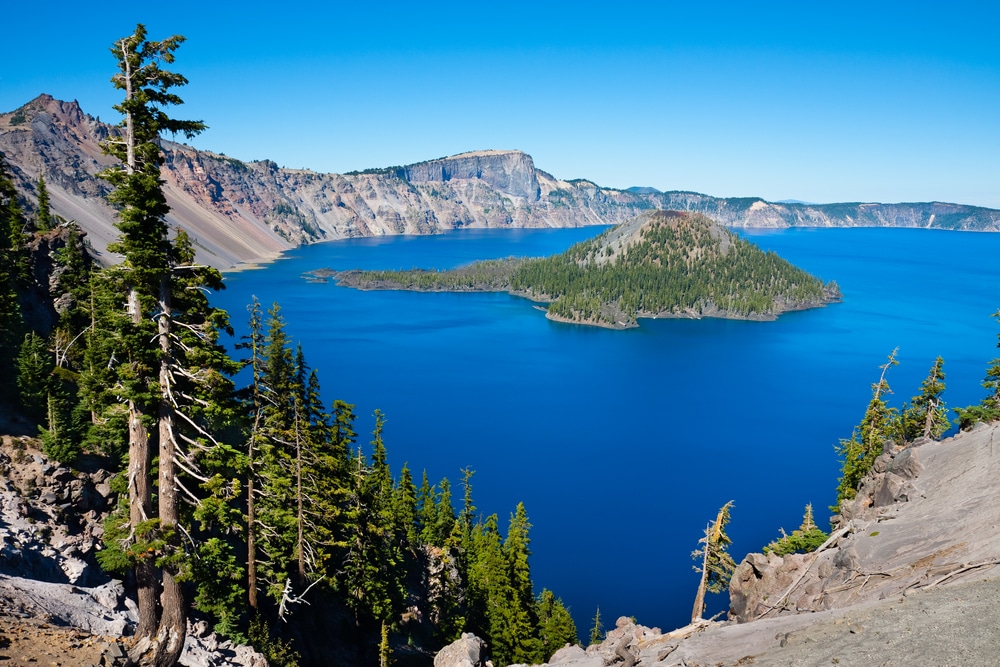 Seeing Crater Lake for the first time is a brilliant sight – the dark blue circular lake down in a crater.

The main attraction at Crater Lake National Park is seeing the lake but there is a wide variety of things to do in the park.

Here are some of the best things to do in Crater Lake NP on your next visit!

10 Things to Do in Crater Lake National Park

Learn How the Lake Was Formed

Note: At present, the Visitor Center is closed

The basic history of Crater Lake is that it was formed by the collapse of Mount Mazama after an eruption.

However, any visitor to Crater Lake National Park should stop by Steel Visitor Center, where you can learn more about the formation of the lake, its islands, and the surrounding features within the park.

The visitor center and other services are located in Rim Village on the southwestern edge of Crater Lake.

Ride the Trolley around Rim Drive

The Rim Drive is the highlight of a visit to Crater Lake. The Crater Lake Trolley offers trolley tours around the lake on the Rim Drive daily. The road can also be driven in your own vehicle, but the trolley ride avoids the stress of navigating the road and parking along the way.

The Rim Drive is a 33-mile route around the entire rim of Crater Lake. Trolley tours are two hours without any bathroom stops and five to seven stops at overlooks. Each trolley ride is led by a ranger who narrates the experience and provides trivia along the way.

Challenge yourself to a Bike Ride along Rim Drive

The Rim Drive road is a popular route for cyclists during the nice weather of the summer months. The road is not an easy ride, as it includes several steep hills, but the views and pullouts make the experience unforgettable.

The road can be ridden throughout the summer, but the best times are during the “Ride the Rim” event – when the road is closed to cars during two Saturdays a year. When the road is not closed, bicyclists must use care, since there are no bike lanes and the road is often narrow and windy.

Stop at the 7 Must-See Pullouts Along Rim Drive

There are many pullouts along the Rim Drive, but there are seven must-see pullouts. These must-see stops include Discovery Point, Watchman Overlook, Cloudcap Overlook, Pumice Castle Overlook, Phantom Ship Overlook, Pinnacles Overlook, and Vidae Falls.

Watchman Overlook is another great lookout point of Wizard Lake, the cinder cone in the middle of the lake. Cloudcap Overlook is at the end of a 1-mile road off Rim Drive and is the highest paved road in Oregon.

The other four viewpoints have other unique features near the lake. Pumice Castle Overlook is a viewpoint featuring orange pumice rock exposed from erosion in the shape of castle turrets. Phantom Ship Overlook is the second island in Crater Lake and is named for its shape resembling a small sailboat.

Pinnacles Overlook is a particularly unique feature, on a 6-mile detour from Rim Drive. Here there are pinnacle-shaped rocks, 100-foot tall spires rising from the floor of the canyon. These pinnacles were formed when volcanic fumaroles rose through volcanic ash and cemented the ash into rock.

Here’s a quick recap of those points and why you should stop:

Go for a Hike

There are several hikes within Crater Lake National Park worth doing, with a variety of lengths and difficulties.

For an easy hike, try a walk to Plaikni Falls. This is a 2-mile hike with a 100-foot elevation gain. The hike will take about an hour and leads you to a snowmelt-fueled waterfall within an old-growth forest that is one of the prettiest waterfalls close to Crater Lake.

The trailhead is located off of Pinnacles Road, 1.2 miles southeast of the Phantom Ship Overlook.

Crater Peak is a moderate hike, at 6.5 miles with 765 feet of elevation gain. This hike takes you up a small volcano with views of Klamath Basin, through forests and meadows. The trailhead is 3 miles east of the park headquarters at the Vidae Falls Picnic Area.

Swim in the Beautiful (But Cold!) Lake

Crater Lake is the main attraction in the national park, and you can spend all day looking at it, but why not go for a swim?

The water in Crater Lake is quite cold, year-round, but during summer the water can be at 67 degrees Fahrenheit, which can be refreshing on a hot day.

Swimming in Crater Lake is allowed at one spot, at the bottom of the Cleetwood Cove Trail, with some restrictions. This swimming spot is what you would expect from a lake in a crater: a rocky shoreline, with no beach. It is also a wilderness location, and there are no lifeguards on duty.

While swimming, you must remain within 100 feet of shore within the marked areas. No long-distance swimming or scuba diving is allowed.

To reach this location, you will need to hike down the Cleetwood Cove Trail, a moderate hike of 2.2 miles roundtrip, and 700 feet of elevation gain on the way back up to the rim. If you choose to make the hike down, do remember that you’ll have to climb back up on the second half of your trek.

Sunrises are best watched from a spot on the eastern side of the rim. The Cloudcap Overlook or Garfield Peak are both good places to view the sunrise.

Crater Lake has some spectacular sunrises and sunsets over the lake. It is also a great place to watch the stars at night away from city lights.

Sunrises are best watched from a spot on the eastern side of the rim. Cloudcap Overlook or Garfield Peak are both good places to view the sunrise.

Cloudcap Overlook is a lookout from the road, at the end of the 1-mile road off of the Rim Drive. The overlook gives you a great view of the sky during the setting sun, with the sun at your back and Wizard Island and the orange and purple colors on the lake in the forefront.

Garfield Peak is a 3.6-mile hike, with 1,010 feet of elevation gain. The walk up is rocky, but the hike will take you to the top of a high peak. If watching the sunrise from the top, you’ll have to bring a headlight and take careful steps as you walk up in low light. The trailhead is accessed at the east end of Rim Village, behind Crater Lake Lodge. The top of the peak is the perfect viewpoint above Wizard Lake for sunrise.

To watch sunset, Watchman Overlook on the west side of Crater Lake, is a great spot to watch the sun setting over the lake. At the overlook, the sun descends over the lake and then over the surrounding mountain ranges and the ocean.

The sunset can also be watched from the top of Watchman Peak, a moderate 1.6-mile hike with 420 feet of elevation gain. A sunset hike is led July 5 – September 10 by rangers. Ask at the ranger station for departure times for the hike during your visit.

Most anywhere in the park is a beautiful, dark spot for viewing stars. The best spots are away from the ranger station and campgrounds, where there is more light pollution at night.

Circumnavigate the Lake by Boat

Boat tours on Crater Lake are offered in the summer. There are both tours of the lake and shuttles to Wizard Island, the large island in the middle of Crater Lake.

Tours of the lake circumnavigate the lake, giving you a unique perspective of the lake from inside the caldera. A few of the lake tours each day include a stop at Wizard Island for a couple hours, giving you time to explore the island.

The boat tours leave the dock at the Cleetwood Cove Trail along the lake shoreline. The trail is steep on the way down and the way up, as it drops 700 feet down to the lake. Make sure to leave at least 45 minutes to descend to the boat ramp, to make sure you don’t miss the boat.

In addition to the boat tours circumnavigating the lake, tours also go to and from Wizard Island.

Wizard Island is a cinder cone created after Crater Lake first filled with water. Even though it looks small from the rim of the lake, the island is 763-feet tall.

While on the island, the Wizard Island Summit Trail is a must-do. The hike to the top of the island is a 2.2-mile trip, with 760 feet of elevation gain. Other activities on Wizard Island include relaxing on the shoreline, fishing, and swimming.

Pin This Guide to Things to Do in Crater Lake National Park!