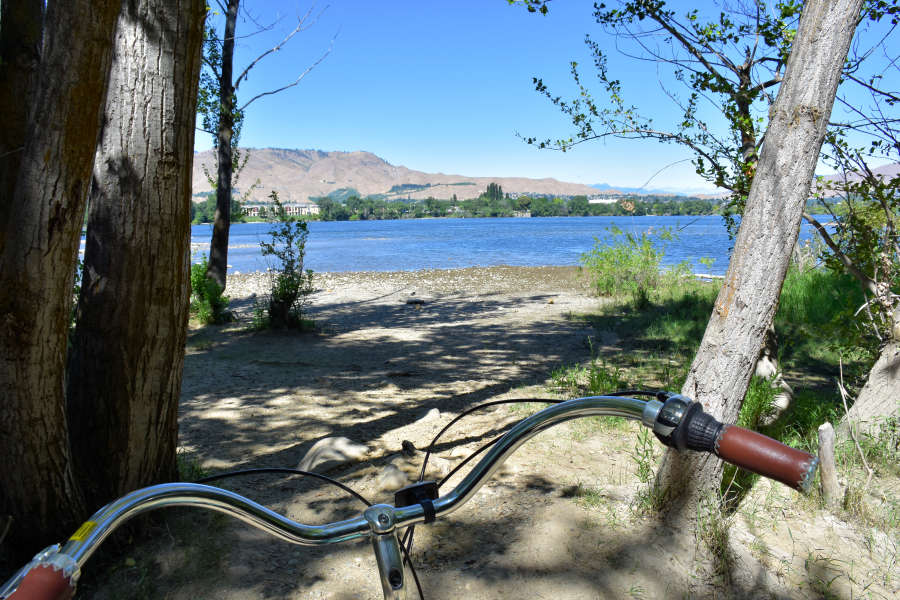 Do you want to visit Wenatchee but aren’t sure what to do when you get to this small town in Washington State?

With a population of around 34,000 people, you’ll find this town in Eastern Washington has plenty to offer visitors for a weekend getaway or summer vacation including wine tastings, a unique market, foodie stops, a historic downtown, outdoor recreation, and plenty of stunning scenery.

My obsession with Wenatchee, Washington started after I visited last year and stayed at the Coast Wenatchee Center Hotel and Warm Springs Inn & Winery.

Wenatchee has a very scenic setting with the Columbia River along its banks, and behind it, the Cascade foothills stretch up toward blue skies.

And, they often are blue for this area receives 300 days of sunshine every year — quite rare for the PNW!

Before I get too carried away, let me tell you the best things to do in Wenatchee, WA, so you can discover this beautiful, sunny part of Washington State for yourself. Don’t just take my word for it!

11 Best Things to Do in Wenatchee, WA

Soak in the sunshine.

Okay, I know I’ve kind of already covered this, but it absolutely bears repeating.

Wenatchee gets A TON of sunshine… like, pretty much unprecedented elsewhere in the state.

Since I live in a part of Western Washington (Anacortes) that gets an average of 111 mostly sunny days and 116 partly sunny days… 300 days of full sunshine is pure bliss!

And, the more I live in a less sunny area, the more I realize how good the sun makes you feel.

What does this mean for a traveler? If you are in need of a sunny small-town destination in Washington, Wenatchee is sure to bring on the sunshine.

Marvel at the sunsets along the river.

Where there is sun, there is often epic sunsets, since your views won’t be obscured by totally clouded-out horizons.

If you like to take in the sunsets, the sunsets in Wenatchee truly won’t disappoint, especially along the river! Just look at that! 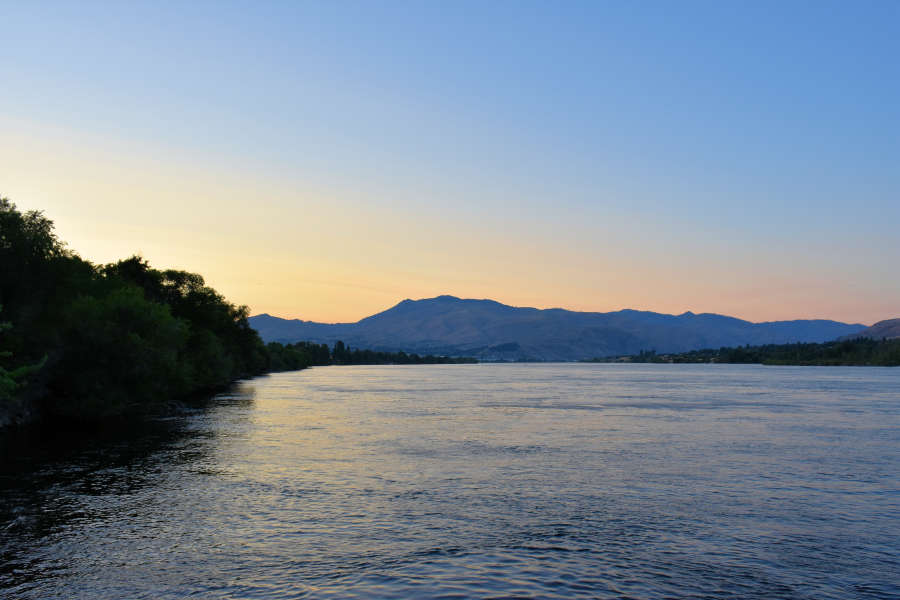 Check out the miles of apple orchards.

As you drive through the Wenatchee Valley, you’ll see small orchards, big orchards, and lots of fruit stands where you can see how productive this area is.

Since its earliest settler days, Wenatchee has been known for its orchards, particularly its apple orchards.

The first trees were planted in 1872, and today this small town is known as the “Apple Captial of the World!”

If you are in downtown Wenatchee, you can see what the area produces all in one location – Wenatchee Valley Farms Market at Pybus Market along the Columbia River.

On my visit, they had delicious Honeycrisp apples as big as a softball, probably even bigger!

Travel tip: If you want to learn more about Washington apples stop by the Washington Apple Commission Visitor Center in Wenatchee (2900 Euclid Avenue). They show a short film about the apple industry, have apple juice tastings, apple orchard and production information, and a gift shop.

Check out a market even better than Pike Place.

I live in Washington, so I’m supposed to love Pike Place Market, right? Wrong. While it is interesting and for many a must-see in Seattle, I cannot deal with the crowds.

Being squashed into a tight place with tons of people pushing at you from all directions is not my idea of a fun morning!

And, yes, I have been there when it is not as crowded, and that is more pleasant for sure. But I’d rather have a truly enjoyable experience and not be stressed out by the atmosphere.

You can have that at Pybus Market.

Pybus Market does have busy moments, especially during special events and market days, but it’s nothing like the endless crowds at Pike Place Market.

Set along the Columbia River, steps from the park and historic downtown Wenatchee, the market has all the things you’d want in a market experience.

Travel tip: If you are driving through the area and only have an hour or two to spend in Wenatchee, Pybus Market will give you well-rounded taste. You can grab a bite to eat, check out local vendors and then take a short stroll along the Columbia River.

Drink your way through the city’s libation scene.

Eastern Washington is known for its wine, beer, and spirits.

While the libation scene is on the smaller side in Wenatchee, I foresee it only becoming more of a draw.

For wine lovers, the area has ten wineries and over 15 tasting rooms.

For beer drinkers, there are three brewing companies.

And, if you are more into spirits, there are three distilleries! So truly, there is something for everyone in Wenatchee.

Check out the outdoor art scene.

Art is everywhere in Wenatchee, and it is free to see!

If you are looking for an outdoor/distanced, kid-friendly activity, check out Art on the Avenues.

This display has 90 sculptures on the Apple Capital Loop Trail and throughout Wenatchee.

Most of the pieces are outdoors along the Columbia River and in historic downtown with a few pieces indoors.

Have a couple of hours and want to experience the great outdoors? Bike the 10-mile Apple Capital Loop Trail!

The best place to start is at Pybus Market, and you can even rent bikes there at Alberg Sports.

The trail is paved and the lop goes on either side of the river with two bridge crossings.

The section near town along the waterfront has parts that are more manicured, including trees for shade. The opposite side of the trail is more of an open prairie with very little shade.

Regardless of where you go, you’ll find the sun intense in Washington, so be sure to wear sunscreen, bring a hat, sunglasses and a bottle of water. After your bike ride, cool down with some gelato by Ice at the market.

If walking is more your style, it is also a great place to stroll and admire the Wenatchee Valley scenery.

Get outdoors — summer or winter!

With Wenatchee’s fantastic year-round weather, it is perfect for opting outside.

For wintertime fun, Mission Ridge Ski & Board Resort is a 30-minutes  away. No matter the time of year, there are adventures to be had.

In all honesty, I’m not much of a winter sports person. I’d much rather drink a Peppermint Patty and watch skiers and snowboarders as they come down the mountain!

I like to hike and bike, so my ideal time to visit Wenatchee is spring and fall.

In April, May, September, and October temperatures are in the 60s and 70s, and therefore very pleasant.

Check out the Ohme Gardens.

The Ohme Gardens is one of the top things to do in Wenatchee that you don’t want to miss.

Set on the outskirts of town, the gardens are a wooden haven with hiking trails, ponds, and views of the valley.

The story of the gardens is just as fascinating as the gardens themselves. Purchased in 1929, Herman and Ruth Ohme transformed their 40 acres into a dream garden with alpine meadows, shaded pools with benches, and hiking trails.

Today, the gardens are open to the public from April 15th to October 15th, seven days a week. Parking is free. Tickets are $8 adult, $4 for children 6-17 and kids 5 and under are free.

As you know, I’m a  wine lover and a foodie. When I can combine both of these passions in my small town travels, I’m thrilled!

A great place to start is the wine tasting room at Jones of Washington in Pybus Market.

The market also has a great selection of restaurants like Pybus Bistro, Fire, and Wenatchee Valley Brewing Co.

The Wenatchee Valley Visitor Center even has a tasting room with samples of local wines, beers, and ciders!

One of things to do in Wenatchee is learn about Miss Veedol. So who is she? Well, she isn’t a person; she’s a plane! One that made the first nonstop Pacific flight with pilots Clyde Pangborn and Hugh Herndon at the helm.

The plane is a replica, as the original was lost at sea, but that doesn’t matter because it is such a cool story.

Born near Wenatchee, Pangborn made a name for himself as a stunt pilot and was known as “Upside-Down Pangborn.”

During his days at Gates Flying Circus, he met Herndon. Together, these aviators had lofty goals.

The first: break the record flying the airship Graf Zeppelin. Unfortunately, they didn’t finish this flight due to weather conditions.

The second, make the first trans-Pacific nonstop flight and win the $25,000 prize.

There is so much more to this story than I can write here, but it has all the classic ups and downs with romance, arguments, and government detainment.

Even on their way from Japan to Seattle, they encountered severe setbacks with the landing gear (they could not land the plane) and some technical issues.

When they arrived in Seattle, the entire city was fogged in. Other nearby major cities were also fogged in. En route, Pangborn decided to crash land the plane on a runway he knew very well – Fancher Field in what is now East Wenatchee.

Both pilots survived, and the propeller is on display at the Wenatchee Valley Museum and Cultural Center.

The site of the former airplane field is now a housing development.

Near the location of the crash, is a memorial to both pilots, and, of course, a fantastic view of the Wenatchee Valley.

Travel tip: To see the Miss Veedol you’ll need to make arrangements via the Wenatchee Valley Museum and Cultural Center. I suggest, visiting the museum first, and then arranging to see the plane, which is in a hanger at the airport.

Where to Stay in Wenatchee

During my visit, I stayed at the Coast Wenatchee Center Hotel and Warm Springs Inn & Winery. I’d recommend both for different types of travelers!

CENTRAL + FAMILY FRIENDLY | If you want to be close to the action and the heartbeat of downtown Wenatchee, stay at the Coast Wenatchee Center Hotel.

It is steps away from dining, shops, Pybus Market, and the Wenatchee Waterfront Park. Every room in the hotel has a view of the Wenatchee Valley, and if you have kids along with you, they will love the indoor/outdoor pool.

ELEGANT B&B | If you prefer staying at a bed and breakfast and are not traveling with kids, Warm Springs Inn & Winery sits along the Wenatchee River.

Rooms are elegantly decorated, and the grounds include multiple shared living spaces, a wine tasting room, a large deck,  and a lawn that touches the banks of the river. In the morning, you’ll be served an amazing breakfast made by a seasoned chef.

30 thoughts on “11 Wonderful Things to Do in Wenatchee, WA”