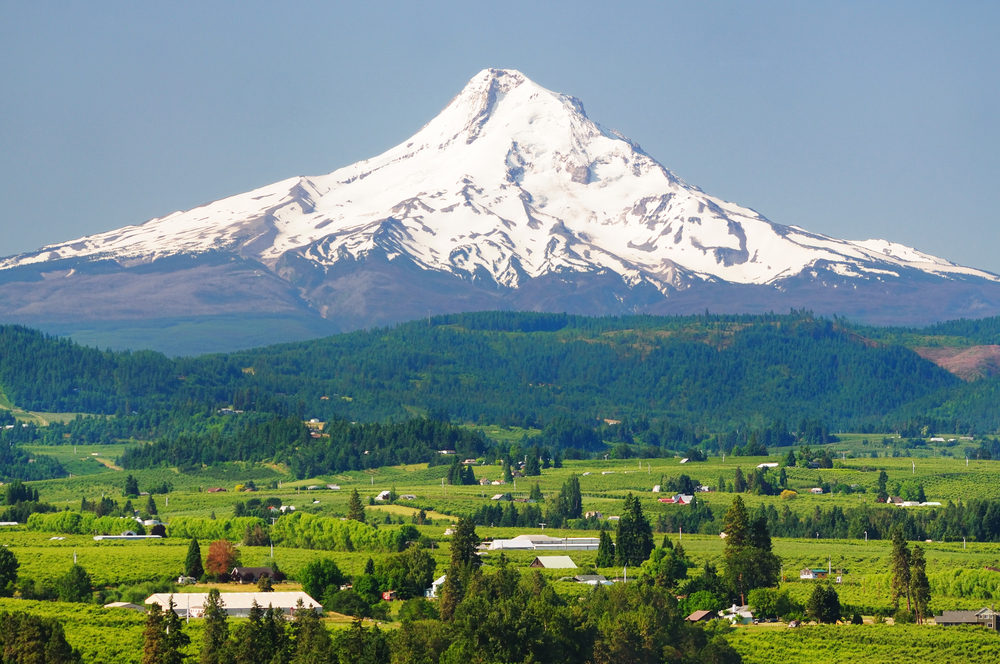 The Rose City of Portland, Oregon enjoys a prime location close to many popular outdoor adventures, which makes weekend getaways from Portland convenient and easily arranged!

Many a Portlander when listing what they love about living where they do will mention all the places they journey to nearby.

A destination worthy of attention in its own right, Portland is perfectly situated for weekend getaway trips to the beach, Columbia River Gorge, Oregon wine country, the Cascade Mountains, and high desert: all within a few hours of driving.

In this fashion, much of the state of Oregon becomes Portlanders’ weekend playground with something readily available to suit everyone: the perfect Portland road trip destination is never far away.

Road Trips from Portland: Weekend Getaways to the Oregon Coast

The shortest route from Portland to the Pacific Ocean over the Coast Range is a mere 100 minutes, making this an easy Portland weekend trip.

US Highway 101 connects a string of beautiful Oregon coastal towns along the shoreline.

The ocean here is cold, averaging 55 degrees year-round and beaches are often breezy, though neither stops intrepid visitors from enjoying the Oregon Coast any time of year… though you’re likely better off with a walk than a swim!

Situated where the Columbia River reaches the Pacific Ocean, Astoria was the first American settlement west of the Rocky Mountains. Its old roots mean you can enjoy the town’s Victorian ambiance, which sets it apart from other destinations on the Oregon coast.

The Lewis and Clark Expedition wintered nearby at Fort Clatsop, today a State Park with a reconstructed fort replica.

Fishing and logging are still strong in Astoria, but these exist alongside tourism, which includes cruise passengers and those exploring the filming sites of movies such as The Goonies, Kindergarten Cop, Short Circuit, and Free Willy.

A coastal hotspot for Portland weekend trippers since trains brought visitors from Portland in the 1920s, Rockaway Beach is uncrowded and unassuming.

The town is a piece of pure Americana and a quick hop to the off-the-radar fishing hotspot of Garibaldi is easily done on the Oregon Coast Scenic Railroad tourist train, which connects the two towns.

Another hop on the train will bring you to the bayside dairy haven Tillamook, perhaps most known for its newly revisioned Cheese Factory Visitor Center and as a gateway to the Three Capes Scenic Loop.

For the quintessential Newport experience, walk the Bayfront boardwalk and enjoy freshly caught seafood beside the lively barking of resident sea lions.

Sand dunes and a cave of stellar sea lions await visitors to Florence, located at the mouth of the Siuslaw River, itself crossed by a beloved 1936 Art Deco bridge.

Weekend Getaways from Portland: Wine Country and the Willamette Valley

Portland anchors the northern end of the 150-mile long Willamette Valley whose fertile, volcanically churned soil drew intrepid pioneers from across the continent.

This heart of Oregon’s farming country is dotted with endearing and historic small towns within an easy hour’s reach of Portland.

Dominated by an iconic grain elevator and train depot — both today turned into winery tasting room — tiny Carlton was once a regional transportation hub for lumber and agriculture.

Today, the cozy town is the perfect spot to situate oneself in the heart of Oregon’s wine country, affording ample opportunities to dine, sip, and shop boutiques along the main strip.

It’s also a great base venture afield into the surrounding undulating countryside, where several of the smaller wine sub-regions intersect.

The largest town and county seat of Yamhill County, McMinnville is home to Linfield College and the Evergreen Aviation and Space Museum (most known for Howard Hughes’ wooden aircraft, the ‘Spruce Goose’ but also housing an innovative waterpark and water ‘museum’).

It’s also home as well to the leafy, award-winning Main Street full of top-notch eateries and quirky specialty shops. The town contains several winery tasting rooms from around the greater region and is a hub to commute to others in all directions.

A small piece of Bavaria is found in charming Mt Angel, first settled by Swiss Benedictine monks over 150 years ago.

The monastery is today open for tours and the town swells a hundred times over in the fall for a full month of Oktoberfest celebrations!

Year around, visitors can enjoy Mt Angel’s German-styled restaurants, taprooms, shops, and buildings including the tower holding the town glockenspiel (said to be the tallest in the United States) which plays its scene and bells three times daily.

Home to thirty large public murals, the picturesque and history-rich former mill town of Silverton is a beautiful weekend getaway from Portland.

It serves as a gateway to two beloved outdoor attractions: the eighty acres of the Oregon Garden and its Frank Lloyd Wright-designed Gordon House and also Silver Falls State Park, which showcases the splendor of Oregon’s fir forests and waterfalls.

Lesser-known attractions in town include the Gallon House covered bridge and the memorial to Bobbie the Wonder Dog, who traveled over 2,000 miles from Indiana to return to Silverton!

Weekend Trips from Portland: Mountains, the River Gorge, and Beyond

The 700-mile long Cascade Range bisects the state of Oregon and produces the world’s most dramatic rain shadow, meaning the wet western half has as its counterpart a sunny and dry desert.

Mt Hood is a mere hour’s drive east of Portland while central Oregon can be reached in three hours.

Sitting almost directly in the center of the state, Bend has become a hub of outdoor recreation and boasts a bustling craft brewery, hard cider, and small-scale distillery scene, as well as bountiful coffee shops and other great things to do in Bend downtown.

From Bend, hikes such as the peaks of the Three Sisters and Mt Bachelor, the waters of the Deschutes River, and the sheer basalt cliffs at Smith Rock are all within easy reach.

Other top attractions include the lava fields and caves of Newberry Volcanic Monument and the comprehensive High Desert Museum.

Bend is a regional center of central Oregon and in close proximity to other towns that are also worth a visit: old-timey Sisters, fast-growing Redmond, and rugged Prineville.

Renowned for its depth and clear blue waters, Crater Lake was formerly the Cascade peak of Mt Mazama and is today the centerpiece of Oregon’s only National Park.

The park also includes old-growth ponderosa pine forests and the night skies here are both dark and starry. Drive or bike the Rim Drive, with thirty pullouts in as many miles.

Enjoy the lake waters too by swimming or taking a boat trip to hat-shaped Wizard Island, or set out on one of the many other Crater Lake hikes or excellent things to do in Crater Lake.

Winter activity at the park is much quieter and very snowy- the park can receive over forty feet between November and May!

The mighty Columbia River winds 1,200 miles south from Canada to form the border between Oregon and Washington, crossing the spine of the Cascade Mountains and demonstrating a change from rainforest to desert in just eighty miles.

A narrow section of the river to the immediate east of Portland is termed the Columbia River Gorge and is beloved for dramatic scenery and abundant outdoor recreation opportunities.

Northeast of Mt Hood alongside the river is the town of Hood River, a ground zero for explorations of the Gorge and a hotspot of craft brewing (and also home to one of the prettiest lavender farms in Oregon!).

Popular attractions in close reach include waterfalls (the largest concentration in North America), Bonneville Dam and Salmon Hatchery, and the valley’s “Fruit Loop” amongst fruit stands, wineries, and cideries.

Oregon’s high desert contains landscapes that surprise those who only know the greener western side of the state. Colorful rock formations at the John Day Fossil Beds can feel otherwordly and as one of the state’s more isolated areas, quite peaceful.

Preserving an extensive fossil record, the monument is comprised of three separate units spread apart with a minimum of 4.5 hours of driving — this site is truly massive, and you may need more than a weekend trip from Portland to do the full National Monument justice.

Near the town of Fossil where one can dig for fossils behind the high school, the Clarno Unit has the oldest exposed rock layers in the monument.

The Sheep Rock Unit houses a Paleontology Museum and hiking trails, while the Painted Hills contains the dramatic colors that bring it the most visitors.

Note: Services (including food and gasoline) are very limited in this part of Oregon — be prepared before you set out on any road trip from Portland!